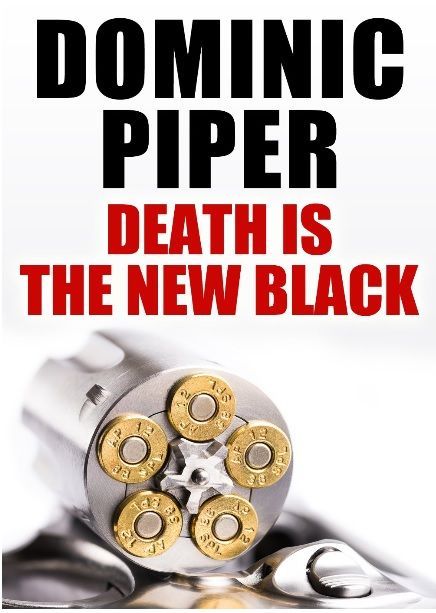 REVIEW - Death is the New Black
by Dominic Piper

Wow – an Adrenalin Rush from Start to Finish!

There are some books that move you, some that affect you and then there are some that shake the living daylights out of you. Mr Piper’s latest tome Death is the New Black is most definitely the latter. Daniel Beckett, Private Investigator and whole lot more besides, has been brought back and he’s in spectacular form. He’s on another case, psychological harassment of top London designer, Sara Holt. A lovely young lady whose stardom will sky-rocket if she pulls off a simultaneous fashion show in New York and Milan. A first for the fashion industry, and one guaranteed to get the suits interested in backing her own designer brand. From the outset, Beckett feels there’s something else going on with this case. His sixth sense knows it, but he can’t place what it is. When the denouement finally arrives it’s like a slap in the face with a rather large branding iron. You’re disoriented, shattered and winded as much as Beckett is. What follows from this moment is possibly the weirdest thing I’ve read in a while, but so captivating that I now have red rimmed eyes through complete lack of sleep. I do not engage in spoilers, so you’ll just have to read this fabulous book, but what I will say (using an old spy adage) ‘What you think you know you don’t!’

I do enjoy the way Mr Piper’s ploughs the depths of Beckett’s mind, and what a murky, magnificent minefield of perverted desires that place is. Even during a high speed chase up a narrow one-way street in London, Beckett feels the suspenders of a woman kind (or crazy) enough to allow him the use of her Audi R8, and his mind flips to thoughts of horizontal jogging. You have to read it to believe it! Perhaps, that’s the amazing part about Mr Piper’s writing, he makes it, however insane, seem believable. The natural, conversational first person style with Beckett constantly in the frame, makes for an incredibly fun read. Beckett is a wonderful creation, despite his little foibles and predilection towards the fairer sex, you can’t help but adore him (as all the women he encounters do). He has an arrogance, a ‘don’t mess with me’ attitude, but he also carries a casualness about him, and an unflappable air when assessing tight situations, and you just feel that he’s been in much worse places. Beckett’s sharp tongue of wit lands him in trouble constantly, but it’s as if he is living life at light speed, and he doesn’t care, as long as he says what he needs to say whilst he’s still alive. His musings and observation are on the button, and are often hysterical. His skills, intelligence and outlook on life makes him a formidable opponent, but enemies don’t realise until it is too late. Beckett is by far one of the most intriguing characters I have discovered. He is an intensely likable (even lovable) character, and every time I encounter him (in Kiss Me When I’m Dead he was a deadly joy to behold) I know I’m in for the ride of my life! If you haven’t met Beckett yet, you should soon, I guarantee it is one appointment you can’t afford to miss!