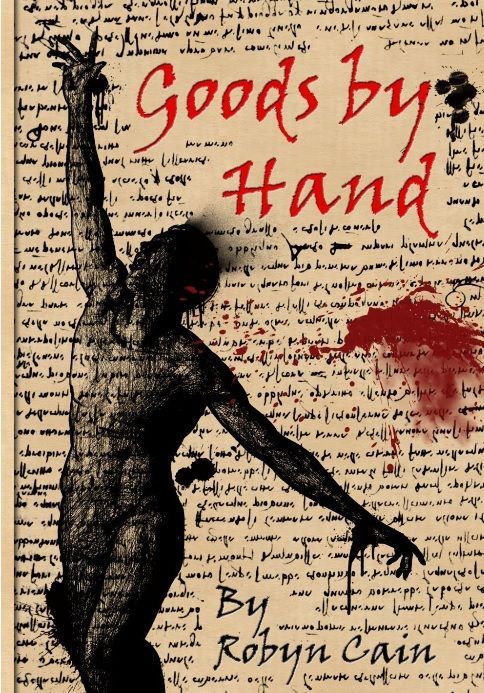 A brilliant book not to be missed - dark, penetrating and distinctly original!

I was at first fascinated by such an unusual cover; I then read the intriguing book description, and mention of `controlling a dark living force through their blood', and I was sold. Goods by Hand is a very unique and accomplished novel. I immediately became entwined in the poisonous relationship of Mina and her despicable husband Richard. If ever there was character that deserved a nasty end, it was him. However, even more so, I was enthralled by the deeply mysterious creation of Saffron Miller. One part loving Earth Mother, one part voodoo High Priestess, Saffron is a character that indelibly imprints upon your mind. She is all about right and true, but her paths are dark and unpredictable. From the outset she knows Richard's Machiavellian intentions, but respects Mina's right to use her own judgement. But when that judgement is forced upon her, Saffron is there for Mina all the way, like a living force of nature herself. Miss Cain has written a brilliant allegory of manipulation and control. How love blinds, and how easily, through such blindness, a person can be subjugated. It is a powerful and affecting story. One that ebbs and flows. Stark violence is balanced against tea shop tête-à-têtes, delivering to the reader the clear presumption that, on the turning of a page, anything could, and probably would happen. Evident throughout the book was a slight dream-state quality bubbling underneath giving a constant sense of unease. That things weren't quite the way they should be. Due to this dreamlike element, I did have some difficulty detecting how much time had actually passed, although peppered throughout are nods to seasons and events, such as Christmas, I still had to think, is this years or months? It's weird as the more I read, the more I lost myself in a superbly strange world, and realised just like being in a dream I was captured by the power of quite an incredible mind - the mind of Miss Cain. Dark, penetrating and distinctly original, Goods by Hand is one book that definitely should not to be missed.

Buy the book on Amazon